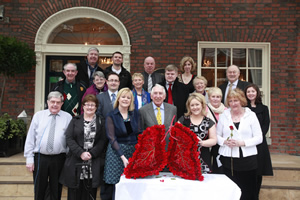 Tuesday 13 February: A group of Irish charities have teamed up with Olympic Champion Dr Ronnie Delany to promote healthy lungs by highlighting symptoms of lung disease and the importance of early intervention. The Irish Lung Health Alliance, which comprises the Alpha One Foundation, the Irish Thoracic Society, the Cystic Fibrosis Association of Ireland, the Irish Lung Fibrosis Association, Ben Bulben COPD Support Group, the Irish Sleep Apnoea Trust, the Asthma Society of Ireland, the Irish Cancer Society and the Irish Sarcoidosis Network, has united officially today, ahead of Valentine’s Day, to launch the ‘Love Your Lungs’ campaign.

The ‘Love Your Lungs’ campaign will see the charities working with medical centres throughout the country to offer free lung function tests for World Spirometry Day taking place in June this year. It also incorporates a new website, www.lunghealth.ie, offering helpful information and advice regarding common lung conditions as well as patient support and tips on how to keep your lungs healthy. The website will be updated regularly with details on participating centres over the coming months. 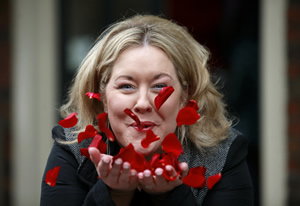 ‘One in five deaths in Ireland is caused by lung disease. It is the most common reason to visit a GP and the third most common reason for acute hospital admission. Yet early diagnosis of lung disease, which can vastly improve outcomes and quality of life for patients, continues to be a challenge due to poor awareness levels. The fact is, shortness of breath, cough and wheeze are not normal and if present should be checked out by your GP,’ said Dr Edward McKone, Consultant Respiratory Physician and President of the Irish Thoracic Society.

‘The campaign also aims to highlight the fact that lung disease affects people of all ages, all socio-economic backgrounds and many non-smokers as well as smokers. ‘The range of conditions represented by The Lung Health Alliance charities is evidence of the broad-reaching nature of lung disease as they affect everyone from infants to senior citizens. In fact lung disease is the most prevalent condition reported in young adults (18-24 years of age),’ said Dr McKone.
Olympic legend Dr Ronnie Delany is an ambassador for the campaign underlining the importance of healthy lungs to an active lifestyle and visa versa. As an Olympic Gold Medallist and the winner of an unprecedented and unsurpassed 40 straight victories “indoors” in America from 1956 to 1959 including 33 mile races, Dr Delany embodies the link between good lung function and athleticism.

“We know only too well how dependent athletes are on good lung function. What’s probably less well known is the reverse – the role that sport and physical activity can play in preventing lung disease and in improving quality of life for people with lung conditions. It’s therefore very fitting that the Irish Lung Health Alliance and the World Spirometry Day Campaign have chosen this Olympics year to launch their campaign, said Dr Delany”

The campaign is a forerunner to World Spirometry Day which will take place on the 27th June.